Build Your Own Redis Challenge

I’ve found ‘Build Your Own X’ tutorials to be a very effective way of improving my understanding of tools we use everyday, like Git, Docker, Redis etc.

What I cannot create, I cannot understand

The problem with many of these tutorials is that they aren’t interactive. It’s okay when tutorials are small, but as they grow in size it can get very hard to follow.

I wish there was a HackerRank-like product where I could, over time, complete ~20 steps and build a large-ish program, while receiving constant TDD-style feedback. This could also be used as a recruiting tool.

You start out by choosing the language you want to attempt the challenge in. 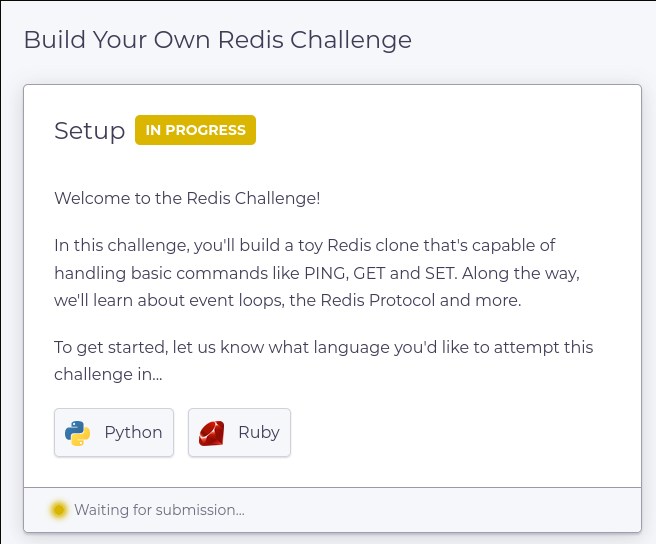 Note: I’ve got support for Python, Go and Swift at the moment. More languages will be added soon.

You’ll then be asked to clone a Git repository, and push an empty commit to start the challenge. 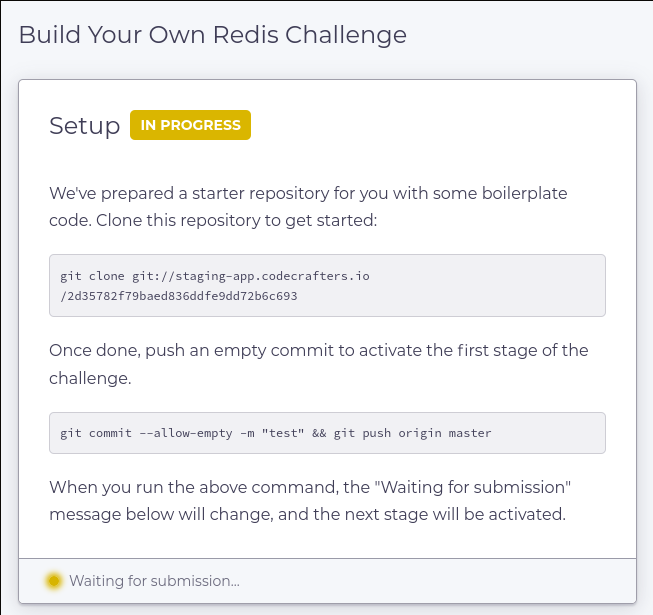 When you run git push, you’ll see test results streamed to your terminal.

At each stage, you’re expected to commit code that passes certain tests. As you progress, the stages get harder and harder:

Here are the stages in the Redis challenge:

Spawn a TCP server that binds to Redis’s default port and accepts connections from clients.

Respond to a PING command. You’ll need to reply using the Redis Protocol.

Respond to an ECHO command. In stage 1, you didn’t really have to parse what the user sent you, but in this stage you will. Time to parse RESP!

Handle multiple clients at once.

Resist the temptation to use multiple threads. Do this using a single thread (like the original Redis does!). Hint: Build an event loop using select.

Implement SET and GET. Your server must now be capable of holding state!

There’s a flag in SET that allows a client to set an expiry on a key. Find it, and add it to your Redis implementation.

How do I try this out?